We look at Nigerian rap released on vinyl records between 1981 and 1991. The first hip-hop record to achieve widespread popularity in Nigeria was “Rapper’s Delight” by The Sugarhill Gang, in 1979. Thirty years later, hip-hop is the premier pop music of Nigeria, dominating radio play as well as the sales charts, feted in megabudget videos, glossy magazines and glitzy award shows. When the average Nigerian kid decides to get into the music biz, the first impulse is not to grab a guitar or a talking drum, but to pick up a microphone.

It was a long way from there to here, though. For years, the earliest attempts at homegrown rap were ridiculed, resisted or downright reviled by the mainstream. And in some cases, perhaps, rightfully so: they were often awkward, overly imitative, fatuous. But they also laid the foundation for the 2Faces, the 9ices, the D’Banjes, Ruggedmans, Modenines and the rest of today’s Naija hip-hop superstars. So here’s our salute to some of the groundbreakers in the first decade of Nigerian hip-hop. 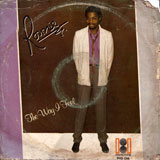 1. Ronnie – “The Way I Feel Rap” (1981)
“Ronnie” was Ron Ekundayo, a highly popular Lagos nightclub DJ, television presenter and on-air personality on the very hip 97.6 Radio Nigeria 2. Inspired by the success of music superstar Kris Okotie, Ekundayo decided to add “recording artist” to his burgeoning resume in 1981. The album The Way I Feel featured mostly Okotie-esque pop and dance tunes, but the title track was a bold and unprecedented stab at the new disco rappin’ trend. Ronnie never recorded a follow-up to The Way I Feel, but his place in history is secure as the man who made the first rap record in Nigeria (and, very possibly, in Africa). 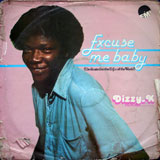 2. Dizzy K. – “Saturday Night Raps” (1982)
Teenaged “Dizzy” Kunle Falola was regarded as little more than another Michael Jackson imitator when he first arrived on the scene in 1982, but over the course of the 80s he would release some of the most ingeniously funky records ever to come out of Nigeria. He was also an early adopter in the rap race, with this disco-ready offering from his debut LP Excuse Me Baby. 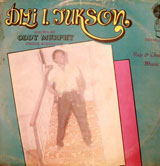 3. Dili I. Jukson – “Rapp and Checkout Music” (c. 1985)
Like most of the early Nigerian rappers, Dili I. Jukson’s rhyme style prioritizes cadence over content but his laidback flow is enough to set the party off on this Beat Street-influenced joint. 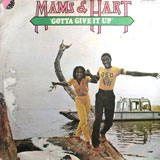 4. Mams & Hart – “Pump” (1982)
Gloria Hart was an American singer who lived and worked in Nigeria in the early 80s, touring with Nigerian pop star Onyeka Onwenu and coaching other artists on vocal techniques. Mambo Kristo was a session drummer who played on several Nigerian records during the same period. In 1982, they got together to record an album of glossy disco numbers, with Gloria kicking a few rapid-fire party rhymes on “Pump.” Not exactly a rap record, but a pointer of things to come… 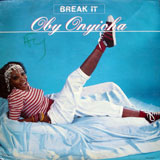 5. Oby Onyioha – “Break It” (1984)
In 1981, canary-voiced singer Oby Onyioha sent shockwaves through the Nigerian music industry with I Want To Feel Your Love—a glossy pop and disco LP helmed by producer Lemmy Jackson. When Onyioha and Jackson reteamed three years later for Break It, the album didn’t fare too well with the mainstream audience but the emerging hip-hop community embraced the title track and its music video, which tipped its hat to breakdancing and sneaker culture. 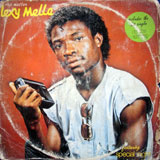 6. Rapmaster Lexy Mella – “On The Air Rap” (1985)
Lexy Mella confidently anointed himself “Rapmaster” on the cover of his debut LP even though he didn’t rap very much (or very well) on the record. He did, however, sport a pretty convincing “hip-hop” image, complete with jheri curl and JPS gear (as in “John Player Special”— the John Player cigarette brand became synonymous with hip-hop during the era due to the company’s sponsorship of an annual, national breakdance competition). 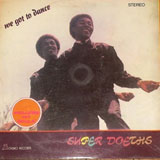 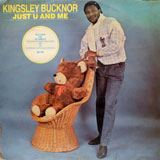 8. Kingsley Bucknor – “You Gotta Keep On Luvin’ Me (Hot Extended Re-Mix Version)” (1985)
Bucknor’s forte was really slick boogie music rather than hip-hop. Still, there was still enough crossover between the two scenes in ‘85 to make this one a surefire floor rocker for the b-boys. 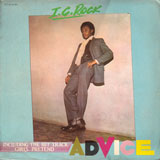 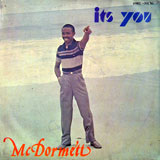 10. McDormett – “Let’s Hear the Funk” (1986)
This offering from singer Ernest McDormett Ofonedu indicates the mid-decade trend towards digital production sounds and the increasing association of “funk” with a more machine-like sonic qualities. The emphasis would drift further and further from live musicians and more towards the craft of the producer and the use of the studio as a musical instrument in itself. 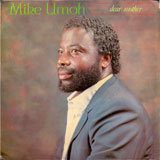 11. Mike Umoh – “Do It” (c. 1985)
Mike Umoh was the drummer in popular soft rocker Bongos Ikwue’s Groovies band in the 1970s before embarking upon a solo career. His biggest hit was the 1981 discolypso smash “Early in the Morning” but he also tried his hand at reggae, funk, pop, gospel and here, rapping. Most of his rhymes seem to be plagiarized but he makes up for the lack of lyrical originality with an abundance of exuberance! 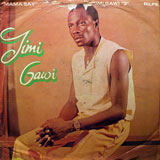 12. Timi Gawi “3” – “Boxing Rapping Show” (c. 1984)
Pop singer Timi Gawi “3”’s rhymes are straight outta nursery school, he doesn’t have much of anything one might describe as a “flow,” and it’s not easy to figure out the connection between boxing and rapping in this show. Perhaps Timi’s concept of rap here derives less from hip-hop than from Muhammed Ali’s rhymed toasts and boasts? 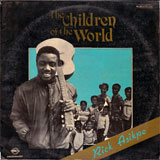 13. Rick Asikpo – “Beat Jam” (1986)
Richard Asikpo started his career while a student in Houston, Texas, fronting the funk band Afro-Fusion (which featured guitarist Charlie Singleton, who would soon find fame with Cameo). Upon returning to Nigeria, he continued to ply his distinctive synth-infused funk. “Jam” was a groove-in-progress that he revisited over the course of three albums, giving it a hip-hop twist on this final installment. 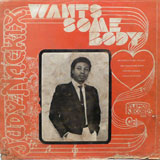 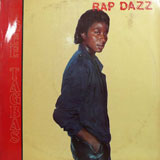 15. Gee Tagbas – “Rap Dazz” (1986)
The breakdance craze was fading too, but Gee Tagbas’s “Rap Dazz” throws up one last hurrah for the b-boys. Gee’s rapping isn’t particularly coherent but works as an effective rhythmic complement to the dark electro groove. 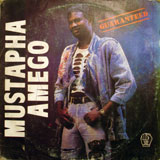 16. Mustapha Amego – “Lagos” (1990)
Mustapha Amego was the host of Sunday Rendezvous, the Soul Train-esque TV show that was de rigueur viewing for the new generation of Nigerian hip-hop and R&B fans in the late 1980s. “Lagos” features backing vocals by Alex Ibeh a.k.a. “Mr. Kool” of Sound on Sound*. 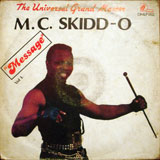 17. MC Skidd-O – “Message” (1992)
“MC Skidd-O” appears to be an incarnation of Skid Ikemefuna, original host of Sunday Rendezvous and its more popular offshoot, The Kessingsheen Hit Show. In a previous life, Skid played guitar in the 1970s rock band Grotto; these days he is a successful businessman and gospel music artist. 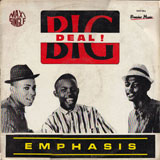 18. Emphasis – “Which One You Dey” (1991)
In our mind, “Which One You Dey?” by Emphasis—a trio composed of rappers Terry and Mouth MC and singer Junior—represented homegrown Nigerian hip-hop finally finding its own voice. Unlike most of their predecessors, Emphasis didn’t rely on barely-rhymed doggerel aping the rhythms and cadences of American old-school rap records, but instead presented a lucid narrative complete with plot, characterization and humor, delivered with a relaxed flow in pidgin English—the true language of Nigeria’s streets.

Up-and-coming young producer Kingsley Ogoro’s laidback afrosynthfunk enhanced the indigenous vibe. The 1991 “maxi-single” Big Deal! would be Emphasis’s sole release, but it set the template for all the Nigerian rap that came after it. (Ogoro went on to become one of the most highly regarded filmmakers in the Nigerian movie industry.) 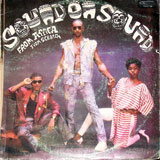 19. Sound on Sound – “I’m African” (1988)
Sound on Sound was a group composed of Nigerian vocalists Mr. Kool, Ebony Laoye and Monica Omorodion, and Americans Troy “Jedi” Williams and Ron “Scratch” McBean. Sound on Sound’s 1988 LP Africa From Scratch (featuring the single “I’m African”) was, without a doubt, the first full-fledged rap album produced in Nigeria. And while at the time of its release a lot of us thought frontman Scratch was a mediocre MC who probably moved to Nigeria because he was too corny to make it in the States, we later learned that he’s actually unimpeachably credible, having played a pivotal role in the history of hip-hop before he came to Africa.

McBean—then known as “Ron the Mad Master Mixer”—originally formed Sound on Sound as a New Jersey DJ crew in the late 1970s. When Sugarhill Records boss Sylvia Robinson became intrigued by the growing hip-hop phenomenon and decided to put together a rap group to make a record, it was McBean who recommended that the record be built on Chic’s “Good Times” and who helped assemble the group, supervising the auditions of Guy “Master Gee” O’Brien and Henry “Big Bank Hank” Jackson.

The third slot in the Gang was filled by McBean’s cousin Michael “Wonder Mike” Wright, who was previously an MC in Sound on Sound. Sound on Sound Productions released a couple of singles in 1980, the best-remembered being “The Incredible Hump,” on Salsoul Records, but when they never really took off, McBean took off for Nigeria and formed a new incarnation of Sound on Sound.

We’d like to think that had we known of McBean’s incredible pedigree at the time, we might have given him a little more respect. But in ‘88, his style just sounded too elementary, too quaint, too old school for ears that were currently devouring Rakim, Chuck D and Slick Rick. In retrospect, it’s ironic to think that one of the facilitators of hip-hop as a recorded genre in America would also end up being one of the pioneers of its entrenchment on the African continent, so much props due to DJ Ron!